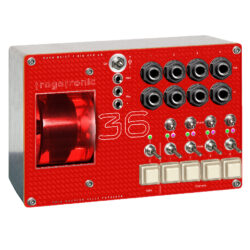 Two decades ago we invented the multi-channel “Crude Audio Interface” with the Iron Cross (joystick-switcher) & Suppressor (button-switcher). Wrought from a handful of passive components our controller-contraptions were misunderstood at first: “Say! Looks cool, but…. what does it sound like?”. But they became the standard for an entire genre of rupturing auditory matter known to those with severely deviant musical tastes. So much so that once the “switchers” caught on, a host of builders world-wide tried to dangle their own low hanging knock-offs in unfortunate, & occasionally unknown Trog-tribute. True visionaries evidently.

c/36 Revolution Analog Audio Controller is the product of the last two decades’ experience with a new twist: A table-top controller as unexampled today as the Iron Cross & Suppressor were 20 years ago.

Each channel (1 through 4) is activated—or deactivated—by dedicated Button & Mode-Switch pair. Each channel’s inputs “mult” to next channel when next channel is unoccupied—handy for spin-panning one signal in stereo or slash patching to four different effects at blistering speed. Primary Gate is comprised by one extra Button & Mode-Switch combination. This serves as a principal control commanding all four channels with the same activate—or deactivate—action. Gate is addressable remotely via optional m/2 foot control should even more limbs be needed to complicate the action. Anything you put into it can be roto-sliced at unprecedented velocity with precision AND intuition. Viva la—well, you get the picture.

Each channel has Phase switch above. Phase selects which—of the Hand Wheel’s two possible positions—will activate its channel. Position of Hand Wheel is monitored by status lamps with retina-rending-green or pupil-pulverizing-pink emitters. Barely move it to switch between phases or spin Hand Wheel outright & alternate 8 times per revolution & stop on a dime with but a finger’s flick. The Hand Wheel affords such unbelievable cut-control that it seems almost like, well, the invention of the—ahem—never mind.

2 CV outputs are connected directly to the Hand Wheel. Each of the two phases has a somewhat linear area of CV output to water your euro garden-variety modular rack-row “rectangler” patches. It could advance your sequencer clock input at varying speeds, be a hand-controlled LFO whose frequency is determined by spin-speed, modulate just about anything & even alterna-pan two VCA’s from “sonically-slow” to “make it stop!”. The list goes on…

…etc., all at high speed; all in real time. It’s intuitive design make the controls + ins & outs’ relationship to one another obvious at a glance. True to its heritage the idea is silly-simple, yet the sheer depth of possible applications are profound.

Here’s two examples which orient one at a solid jumping-off point of reference to c36 function in practice:

All Trogotronic instruments come complete with pretty much everything needed to “plug & play”. Still, herein are replacement parts should ever something go missing (plus a few extra options should ever such a fancy strike). 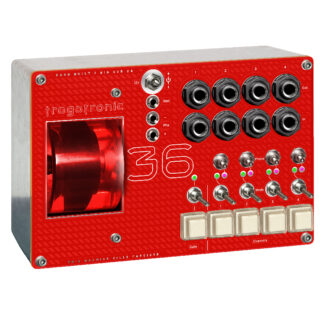